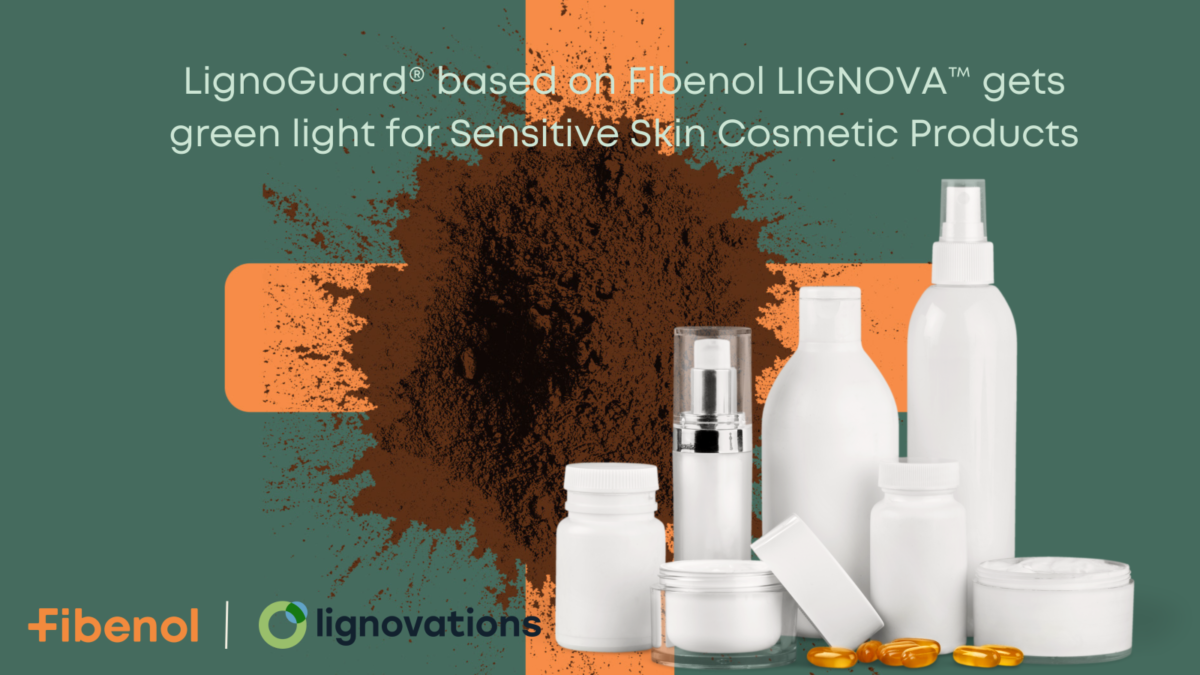 Using Fibenol’s lignin called LIGNOVA™ as a raw material, Lignovations has developed a new functional ingredient called LignoGuard® that has passed all relevant safety tests to be used in cosmetic products including those for sensitive skin.

Lignovations refines, purifies, and homogenizes LIGNOVA™ into the unique LignoGuard® particle form which greatly increases the performance, dispersibility, and functionality of the lignin source material. As a result, LignoGuard® is compatible even with sensitive skin and can successfully be integrated into cosmetic formulations. In skin care applications LignoGuard® can serve multiple functions such as significantly reducing the amount of synthetic and mineral UV filters and serving as a natural antioxidant as well as an emulsion stabilizer.

“Collaborating with Lignovations has been of high importance for Fibenol as we see the high customer awareness and demand for low environmental impact products in the cosmetics field. The sector puts a strong focus on the transparency and sustainability of the full value chain to move away from petrochemicals. To have LignoGuard® made from our LIGNOVA™ lignin confirmed safe to use in cosmetics highlights the true potential of our lignin. It paves the way for LIGNOVA™ to be used in a wide range of end-use applications from bitumen replacement in asphalt to specialty applications in cosmetics, “ explains Peep Pitk, CDO of Fibenol.

In recent years an increasing number of chemical ingredients have been banned by regulators due to health and environmental concerns. In conjunction with a shift in consumer preferences, the demand for sustainable ingredients has increased sharply. Therefore, Lignovations manufactures LignoGuard® without the use of any harmful chemicals and has received the eco-certification COSMOS by ECOCERT for the use in natural cosmetics, highlighting that it is not only safe for humans but also for the environment.

“Together with Fibenol, we meet the high-quality standards that are needed to successfully turn lignin into a safe functional ingredient for the most demanding applications. The successful safety assessment of our LignoGuard® material proves that our technology is a key enabler for the safe use of lignin in cosmetics products,” says Martin Miltner, CEO of Lignovations.

Besides cosmetics, Lignovations’ LignoGuard® can also be used to improve the sustainability of coatings, packaging, and many other applications. Together, Fibenol and Lignovations are working towards unlocking the full potential of lignin to accelerate the transition to a bio-based circular economy.

Lignovations develops and manufactures functional ingredients from lignin for consumer products. By transforming upcycled biomass lignin into unique colloidal particles, Lignovations patented technology makes the protective properties of lignin available for many high-value applications in industries such as cosmetics, packaging, and coatings.

Fibenol implements new cutting-edge technology to produce bio-based raw materials like lignin, wood sugars, and specialty cellulose from wood residues. Fibenol’s innovative fractionation process converts more than 90% of woody biomass into high-value materials with minimal environmental impact. These sustainable bio-based materials can be used as replacements for fossil-based chemicals to produce cosmetics, plastics, construction materials, and many other products. Fibenol is catalyzing the transformation of industries to move beyond the use of fossil resources.